Coface’s payment survey confirms that sales on credit are being extensively used by Polish companies. Although credit periods have become common practice, it does not mean that receivables are being paid on time.Coface’s survey reveals that nearly a quarter of Polish companies are faced with overdues that exceed due dates by at least three months. In general, outstanding receivables should start to decline - but not markedly so in all sectors.

Coface’s first study on payment experiences in Poland was carried out during a period of temporary slowdown in the economy. The lower contribution from EU co-financed investments and the increased uncertainty of companies led to a contraction in fixed asset investments. Nevertheless, this did not have devastating effects for overall Polish growth last year. Coface estimates that Poland’s GDP growth reached 2.7% in 2016 and forecasts that it will speed up to 3.1% in 2017.

Sales on credit have become market practice and they are now offered by the majority of Polish companies. Nevertheless, businesses are reluctant to wait long for payments and, on average, short credit periods of up to 30 days predominate. The transportation, metals and construction sectors are more generous, as they offer longer credit periods. In contrast, the textile-clothing, agro-food and retail sectors are the most restrictive in this regard. Polish companies are aware of the risks related to offering sales on credit. Most of the companies surveyed have written terms and conditions of business concerning credit periods. The most widely-used tools for mitigating payment risks include assessments of the client’s financial situation, payment monitoring, credit insurance and debt collection.

“It is not only sales on credit that have become standard practice. Unfortunately, payment delays are also commonplace for Polish businesses”,explains Grzegorz Sielewicz, Coface economist for Central & Eastern Europe. “The bulk of Polish corporates experience payment delays, while the longest overdues are noted by the construction and transportation sectors. These industries report payment delays of almost 84 and 113 days, respectively – compared to a cross-sector average of 51.5 days”.

According to Coface’s calculations, the cross-sector average for payment delays is 51.5 days. Certain segments, however, report much longer payment delays - particularly transportation (112.9 days) and construction (83.6 days). The retail sector benefits from the shortest overdue periods, with an average of 19.3 days.

Improvements are on the horizon

In line with the acceleration of Poland’s GDP growth this year, Polish corporates expect improved business conditions and a stabilisation, or even decline, in outstanding receivables during the course of 2017. The majority of the survey’s respondents believe that last year’s slowdown was a short-lived one, with 40% expecting to see an increase in sales over the next six months and higher profitability anticipated by 54%. In a sectorial split, an improvement in sales is particularly expected by the retail, energy, textile-clothing and automotive sectors. By contrast, the transportation, metals, ICT and construction sectors forecast lower sales in the next six months.

In terms of general future anticipations regarding overdues, almost half of the companies questioned do not expect to see changes in the next six months. There are a greater percentage of companies (29%) that expect to see a decline in outstanding receivables than those which forecast an increase (22%). The sectorial split indicates that some sectors will suffer more than others from overdues over the following months. In the construction sector, 55% of companies expect to see increasing overdues, while only 12% anticipate a decrease. This corresponds to Coface’s sectorial risk assessment which has ranked the construction sector in Poland at the lowest notch of very high risk since November 2016. In line with improvements in funding from the current EU budget, the construction sector should enjoy an improved business environment and liquidity risks should thus start to decrease. The return of interest from the private sector to invest in fixed assets should also help to support the construction sector, as investments in buildings and structures fell last year. Although 2017 should show some improvements, these will probably not be perceived before the second half of the year. Moreover, a relatively significant share (39%) of companies in the transport sector expect that their overdues will rise, 8% believe they will decrease and over half do not anticipate any change. The transportation sector’s main concerns are related to the weaker dynamics of global trade, the protectionist measures on road transport that have been implemented by some Western European countries and the growing difficulties in filling job vacancies. These factors will continue to weigh on the transportation sector this year. In contrast, segments which expect the strongest falls in outstanding receivables over the next six months include the textile-clothing, metals and automotive sectors. 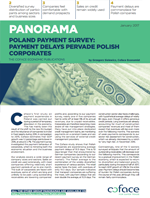