Latin America is a major producer of commodities and recent drop in oil prices is impacting countries of the region in different ways. Some of them may benefit from lower international quotation, others are negatively impacted already in the short term and finally a third group could be affected in the medium term only.

Who should win and who should lose in this scenario will be explored in the first part of this Latin America Panorama. In addition we will focus on the current economic environment as well as the forecast for Argentina, Chile and Colombia, representative economies in the region that have faced different scenarios. Argentina is currently in recession, with high inflation, low international reserves, increasing imports barriers and the holdout issue is still going on. On the opposite side, Chile that is often considered as the region benchmark, has reported slowdown in activity mainly associated with lower copper international prices. And the Colombian economy which has been the frontrunner in the region recently, will not be immune from the oil shock neither.

In this country by country analysis, a focus of specific key sectors in each country will be made. Hence, in Argentina we wonder how the automotive market is performing against the backdrop of the current economic turmoil. Chile is major mining producer, but activity has slowed down due to the lower international prices of mineral commodities (especially copper due to its leading position as producer). In Colombia construction has been boosting activity, but some late payments have been reported. 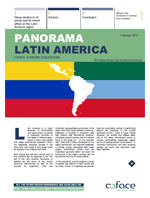