The Chinese economy staged a comeback in 2017. GDP ticked up from 6.7% in 2016 to 6.9% in 2017, favoured by strong demand, as well as loose monetary and fiscal policy settings. As a result, risk managers have become more complacent, both in terms of their economic expectations and their risk management procedures.

Coface has been conducting annual surveys covering companies’ payment experiences in China since 2003. The aim of this exercise is to better understand corporate credit management practices and payment experiences. In our latest survey, data collection was conducted during the final quarter of 2017, and valid responses were received from 1,003 companies.

40% of those surveyed reported that they do not use any credit management tools. This is understandable in the context of improving payment conditions. Average payment terms in China increased to 76 days in 2017, up from 68 days in 2016. Moreover, fewer respondents stated that they saw an increase in payment delays (29% in 2017 versus 46% in 2016).

However, better headline figures notwithstanding, tail risks have continued to increase, despite better economic performance. The proportion of respondents experiencing payment delays exceeding 120 days increased to 26% in 2017 from 19% in 2016, while those experiencing ultra-long (more than 180 days) payment delays exceeding 2% of their annual turnover increased from 35% in 2016 to 47% in 2017.

More worryingly, those reporting that more than 10% of their annual turnover was tied up in ultra-long payment delays increased to 21% in 2017 from 11% in 2016. According to Coface’s experience, around 80% of these ultra-long payment delays don’t get paid at all. When these constitute a sizeable proportion of a company’s total annual turnover, their cash flow may be at risk.

Some pockets of stress are notable within the Chinese economy. The energy (33%), construction (32%), and automotive (27%) sectors registered the highest proportion of ultra-long payment delays exceeding 2% of turnover. Paper and textile recorded the lowest (10%), followed by the pharmaceutical sector (15%). 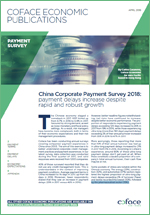